This is the Mercedes-Benz Vision EQXX, and it’s the result of a massive technology project to improve the company’s electric vehicles. It just so happens that the result of the project is a real car that drives and conforms to safety and road regulations. Is it a production car? No, it’s not going on sale ever, but Mercedes says much of what it learned in putting the Vision EQXX together will find its way into production electric cars one day. To prove the technology, Mercedes is even going to attempt a 621-mile road trip across Europe with the Vision EQXX soon.

There’s a mountain of information and tech to dive into, but we’ll start with a brief overview to explain why the Vision EQXX is special and what Mercedes’ work has resulted in from a big-picture perspective.

The goal was to build an electric car with a range greater than 1,000 kilometers, and Mercedes has done exactly that. For us Americans, that’s just over 620 miles. Mercedes engineers got there by going the efficiency route, not by supersizing the battery, which is the most impressive aspect of the Vision EQXX. As it stands, the EQXX has an astounding efficiency figure of 6 miles per kWh. That’s significantly better than even the most efficient EVs on the market today, Tesla included. With that information in mind, let’s get into how Mercedes engineered an EV that is so efficient.

We’ll start with the battery, since that’s the heart of what an electric car is. Mercedes says it worked with the Formula One team at Mercedes-AMG High Performance Powertrains to put together a super-high-density battery pack. The pack itself is “just under 100 kWh” of usable energy, but it can be put into a compact car like the EQXX. It has the potential energy of the EQS, but the pack itself has 50% less volume and is 30% lighter than that in the EQS. Mercedes attributes the improvements to progress in the chemistry and new OneBox compartment that improves the level of integration of the battery pack to the platform. It even features a “lid” that is made of a sustainable composite material and then reinforced with carbon fiber.

We know that other manufacturers have raised the bar up to 800-volt electrical systems, but the EQXX experiments with a 900-volt system that runs and works. Mercedes didn’t confirm that a 900-volt system would find its way to production soon, but it did say it was assessing the technology for potential future use in a production car. The one missing factor in Mercedes’ battery talk is charging. It doesn’t appear as though any breakthroughs have been made in charge time for the EQXX.

But then there’s the drive unit itself, which consists of the electric motor, single-speed transmission and the power electronics unit — the last of which is pulled from the AMG Project One hypercar. However, the single electric motor itself is not super powerful, as Mercedes rates it at 201 horsepower. The idea was to make it efficient, not a supercar. Mercedes uses a new generation of silicon carbides in the drivetrain, and says that the efficiency of the drivetrain as a whole is 95%. That means that 95% of the energy from the battery goes to the wheels, which is a fantastic figure.

This super-efficient drivetrain produces very minimal waste heat, which also means its thermal management system can be very lightweight. Through aero-shutters, coolant valves and water pumps, the drive unit is kept at the proper temperature with a very small energy cost.

And since we’re talking air management, it’s time to get into the aerodynamics of the Vision EQXX’s design. The coefficient of drag is only 0.17. That beats the current production car leader — the EQS — which has a Cd of 0.20. Mercedes says that on a long-distance highway drive, a typical electric car dedicates about two-thirds of its battery capacity simply on cutting through the air ahead. That’s why a slippery shape is so necessary for long range. 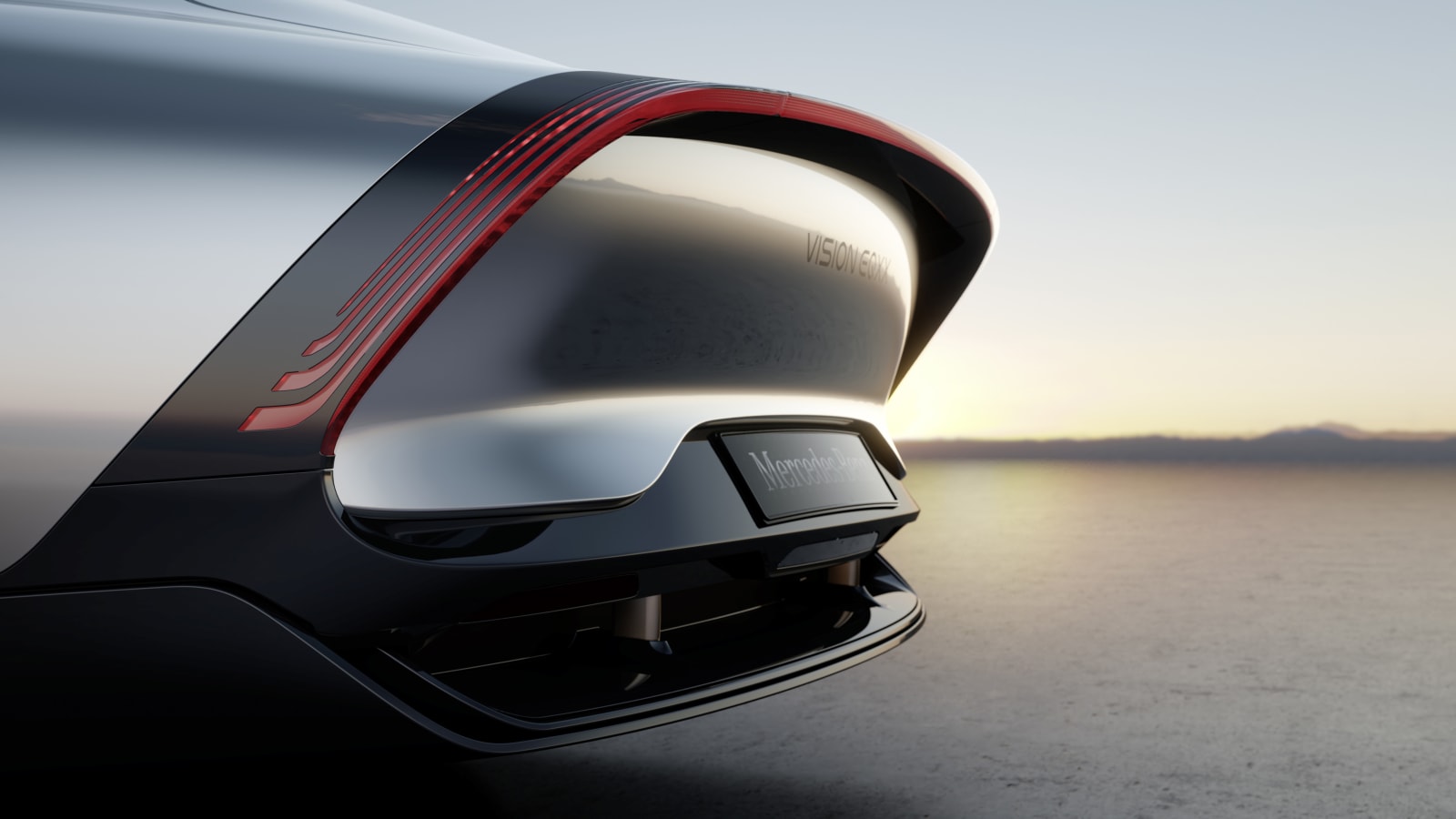 Mercedes lists tons of design choices it made to get the EQXX’s design to be as efficient as it is. The frontal area is smaller than that of the CLA. Its track is 50 mm less at the rear than the front. The air curtain at the front bumper is paired with the wheel covers to remove any possible aerodynamic separation from the front wheels. Air pathways on the hood help to reduce drag around the mirrors, and cooling shutters that open on the hood cause less drag than if they were mounted into the underbody. Air flows over the car into a “tear-off edge” at the rear. It utilizes a retractable rear diffuser that deploys at high speeds. Mercedes even worked with Bridgestone to create unique Turanza Eco tires that have aerodynamically optimized sidewalls to match the covers mounted on the 20-inch forged magnesium wheels.

It’s a work of art if you’re a fan of aerodynamics, and we think it’s actually rather attractive at the same time. Mercedes was able to put together both a beautiful and an intensively low drag car, which is exactly what we want to see as we transition into an era of EVs.

Of course, efficiency also comes from being lightweight, and that’s something electric cars are traditionally pretty terrible for. In an effort to make the structure lighter, Mercedes used an intriguing BIONEQXX aluminum structural casting as the major structural component at the rear, which we’ve seen used on the EQS already. What is BIONEQXX? It’s a casting that has a web-like appearance with gaps (read: holes) where there is no need for structural elements. Material is only used where it’s necessary for structural function and where loads are exerted. Of course, holes in the body aren’t ideal when a car is driven in water and mud, so Mercedes uses a sustainable plastic substitute produced by 3D printing to fill the holes — 42 of them to be exact. This complex process saves approximately 15-20% of the weight of a traditional casting, Mercedes says. The same process is used for the damper domes and saves 8.8 pounds versus conventional domes.

The doors are made of a combination of carbon fiber and glass-fiber reinforced plastics. Mercedes uses aluminum brake rotors that dramatically reduce weight versus cast steel rotors — brake dust emissions are also reduced by 90% thanks to a unique coating used on the rotors. Glass-fiber-reinforced plastic springs also replace conventional coil springs, saving weight. In the end, the Vision EQXX weighs 3,858 pounds. That’s still no lightweight, but it’s lighter than most luxury EVs on sale today. 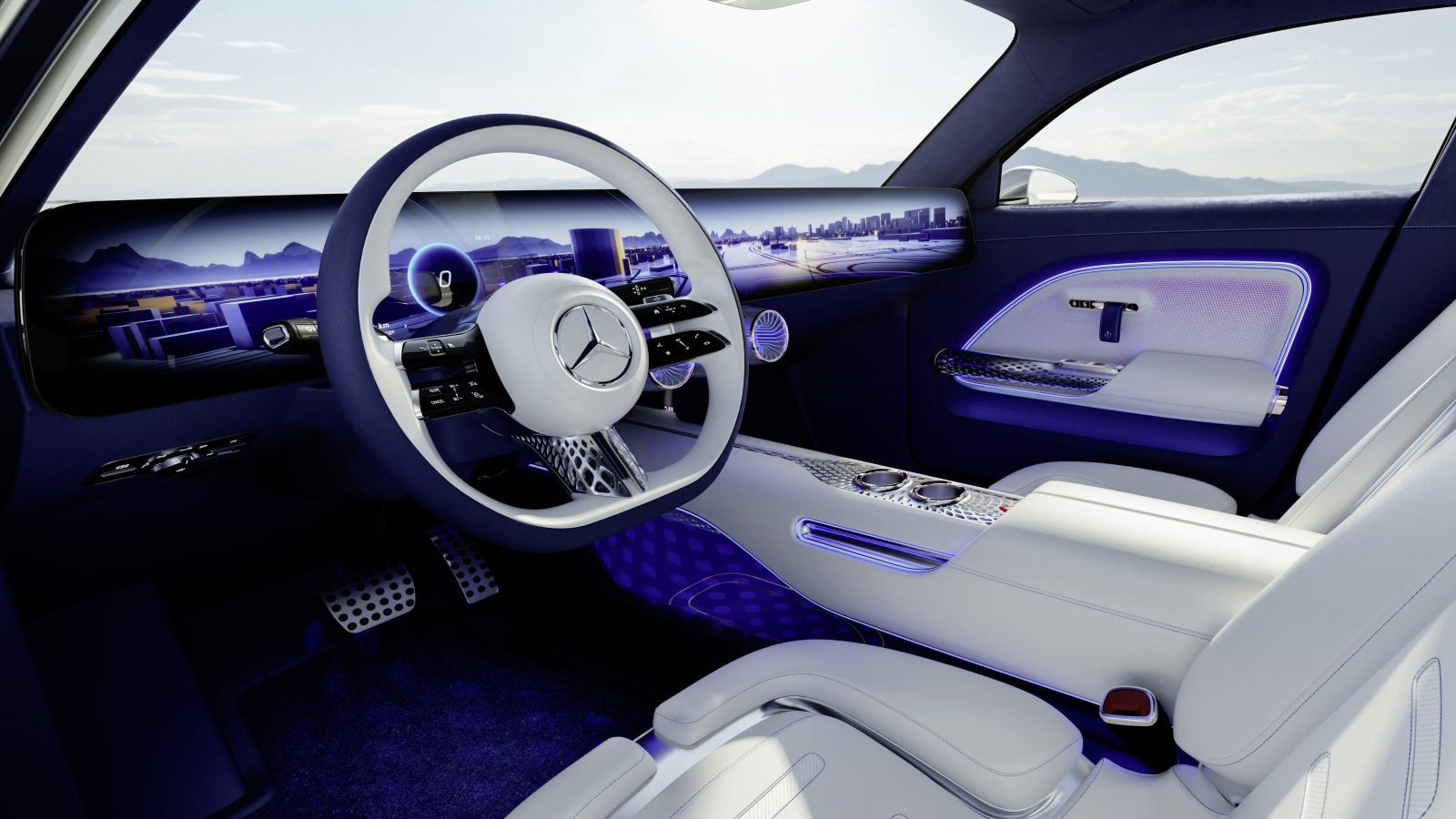 There are plenty of efficiency-related efforts made on the EQXX’s interior, too. The massive 47.5-inch mini-LED 8K display has over 3,000 local dimming zones, which means it only consumes energy for the parts of the screen that light up. The detail of the navigation system adjusts depending on the place in your journey, as it reduces digital details on long highway stints to reduce energy consumption used to produce 3D maps in urban areas. The 4D Burmester sound system is revamped by reducing the number of speakers (that’s a first) and placing the speakers closer to the occupants. To retain the same quality we expect from Mercedes, the system uses two speakers in each headrest and a bass exciter in each seat.

Plus, the roof features solar panels. Mercedes claims that on an ideal, sunny day, the panels can add up to 15.5 miles of range. However, in most cases, the solar energy is simply stored in a lithium-iron battery that supplies power to the climate system, infotainment system and other ancillary systems. This means that there’s less of a power draw from the big lithium-ion pack to power all of those other systems, increasing your overall range.

There’s plenty to say of the actual materials used throughout the cockpit, too, as Mercedes shows us a new sustainably-sourced interior philosophy. The door pulls are made of a “biosteel fiber,” which is a “vegan silk-like fabric.”  Its seats are made using mycelium, a leather substitute constructed out of the underground rootlike structure of mushrooms. Other leather throughout is replaced by Deserttex, a material made using pulverized cactus fibers. The floor carpets are made of bamboo fiber, and your traditional Mercedes “Dinamica” is made from 38% recycled PET bottles. 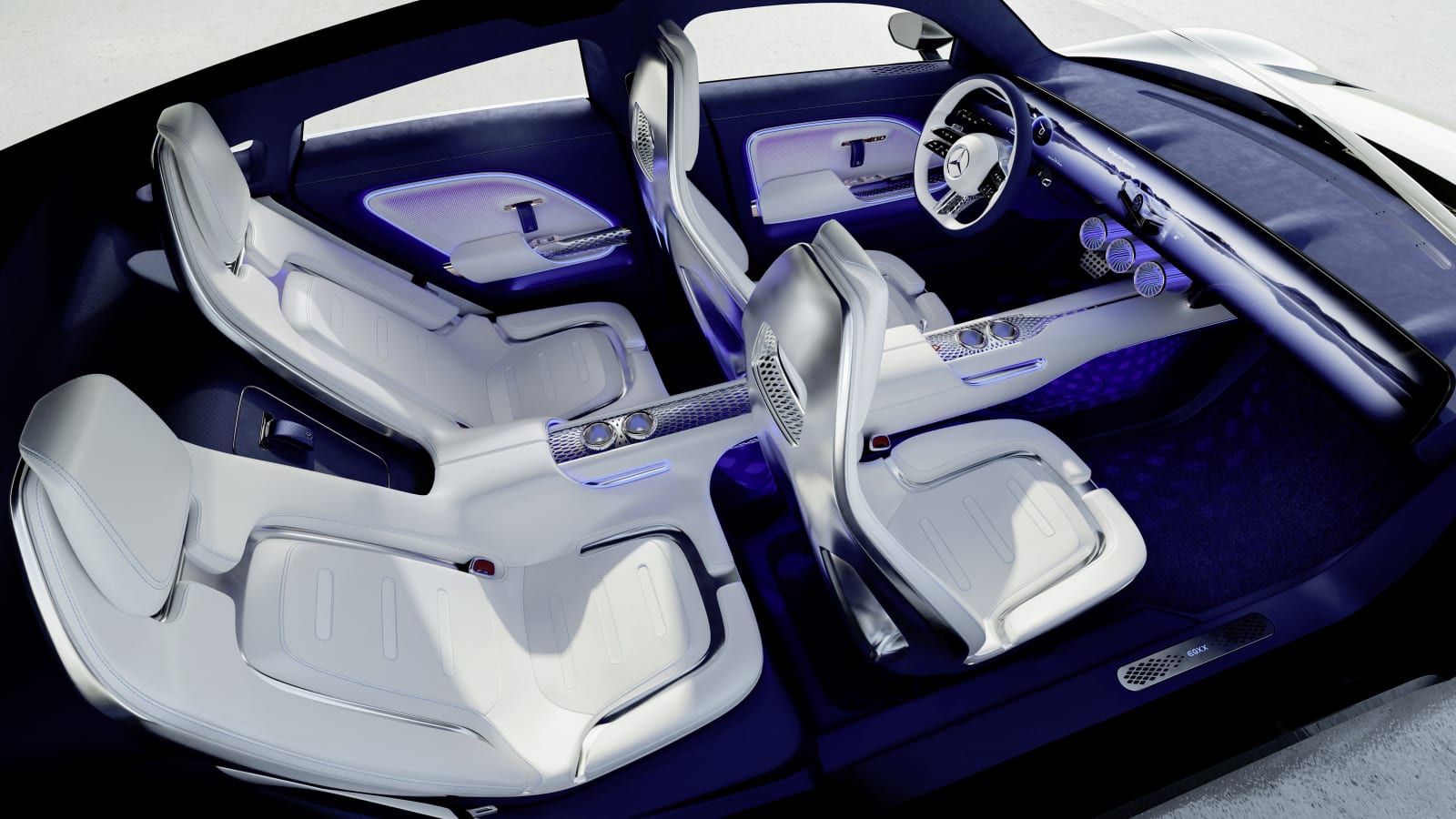 When it comes to tech, that massive singular screen stretching from pillar-to-pillar houses Mercedes’ latest innovation: a road trip sidekick. The “sidekick” is meant to be your guide that responds to the driver’s and passengers’ needs. One of those features is improved “Hey Mercedes” functionality, as the voice is now much more real in nature, and machine learning gives the character a personality of sorts. This so-called sidekick is meant to predict what you might want displayed on the screen and has its own zone on the display. However, Mercedes says you can turn it off if you so choose.

The last point of discussion with the Vision EQXX is the speed at which Mercedes essentially developed a safety-regulations-passing, driveable car. Through new use of digital tools in design and engineering, the Vision EQXX was completed in just 18 months. This includes over 186,000 “test miles” run on a computer. It’s especially impressive when you look at just how many teams were involved in the project, too, as this car was helped along by both the F1 and Formula E teams to make it the best it could possibly be.

Maximum efficiency in electric motoring was the goal, and Mercedes’ efforts will hopefully lead to even better efficiency out of production electric cars in the near future.