Hundreds stranded all night on snowy highway in Virginia

RICHMOND, Va. — Hundreds of motorists waited desperately for help Tuesday after being stranded for nearly 24 hours in freezing temperatures along a 50-mile stretch of highway south of the nation’s capital that became impassable when tractor-trailers jackknifed in a winter storm.

The disabled trucks triggered a chain reaction Monday as other vehicles lost control and blocked lanes in both directions of Interstate 95, the main north-south highway along the East Coast, police said. As hours passed and night fell, motorists posted messages on social media about running out of fuel, food and water.

Meera Rao and her husband, Raghavendra, were driving home from visiting their daughter in North Carolina when they got stuck Monday evening. They were only 100 feet past an exit but could not move for roughly 16 hours.

“Not one police (officer) came in the 16 hours we were stuck,” she said. “No one came. It was just shocking. Being in the most advanced country in the world, no one knew how to even clear one lane for all of us to get out of that mess?”

There were no immediate reports of serious injuries.

Around daybreak, road crews began helping drivers get off “at any available interchange,” the Virginia Department of Transportation tweeted.

By 9 a.m., a single lane of traffic was creeping forward between many stalled trucks and cars in one direction. People could be seen walking down traffic lanes still covered with ice and snow.

Crews were working to tow the stopped trucks and to remove snow and ice while guiding stranded motorists to the nearest exits, transportation officials said.

Gov. Ralph Northam said his team responded through the night, sending out emergency messages to connect drivers with help and working with local officials to set up warming shelters as needed.

The governor said he could not provide an estimate for when I-95 would reopen or how many vehicles remained stranded. Transportation Department engineer Marcie Parker said the agency expected to finish clearing the interstate by Tuesday night and that it should be open for the Wednesday morning rush hour.

People who were stranded overnight and their families lashed out at Northam on Twitter, asking why the National Guard was not deployed.

Northam said he opted not to request National Guard help because the issue facing state crews was not a lack of manpower but the difficulty of getting workers and equipment through the snow and ice to where they needed to be. He said that effort was complicated by disabled vehicles, freezing temperatures and ice. 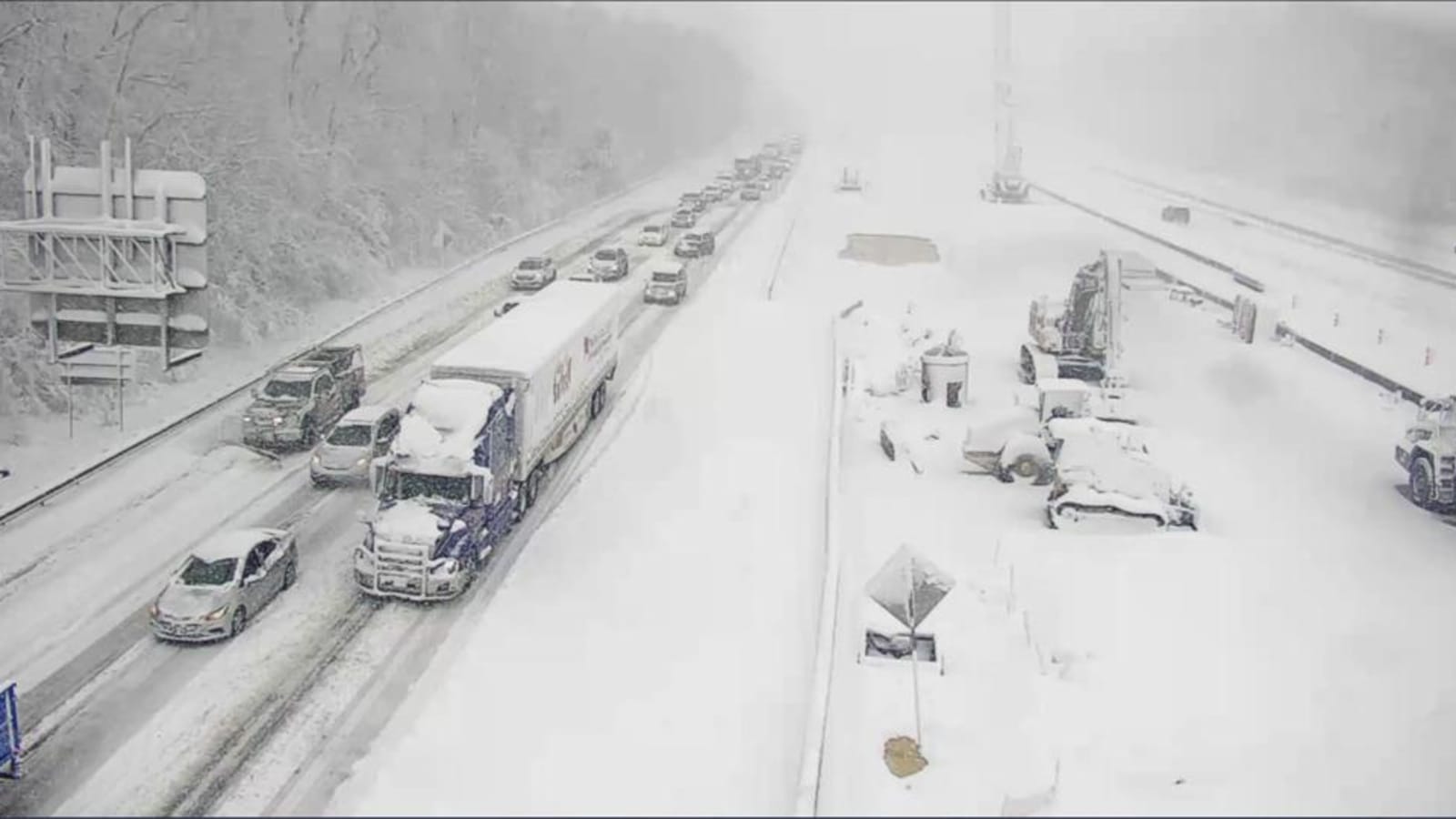 Heavy rain that preceded the storm made it difficult to pretreat roads, and conditions began to deteriorate around midnight, he added.

Rao said they stopped their car engine at least 30 times to conserve gas and ran the heat just enough to get warm. They had some potato chips, nuts and apples to eat, but Rao did not want to drink any bottled water because she had a sprained ankle and did not think she could reach a makeshift restroom.

Finally, around midmorning Tuesday, a tow truck driver appeared and cleared away snow, allowing the Raos and other cars back up and take the exit.

“He was a messenger from God,” Rao said. “I literally was in tears.”

Up to 11 inches of snow fell in the area during Monday’s blizzard, according to the National Weather Service, and state police had warned people to avoid driving unless absolutely necessary, especially as colder nighttime temperatures set in.

Compounding the challenges, traffic cameras went offline as much of central Virginia lost power in the storm, the transportation department said.

Sen. Tim Kaine, who lives in Richmond, said he was stuck in his car 21 hours after starting his two-hour commute to the Capitol at 1 p.m. Monday.

“This has been a miserable experience,” Kaine told WTOP. Traffic was so tightly packed that emergency vehicles struggled to remove disabled cars and trucks, he said.

Kaine described camaraderie among those who were stranded, including a Connecticut family returning from a Florida vacation who walked up and down lines of parked cars sharing a bag of oranges.

Darryl Walter, of Bethesda, Maryland, was stuck for 10 hours as he drove home from a Florida beach vacation with his wife, son and dog Brisket.

They had a few bottles of water, some bags of chips, a blanket for warmth and Trivial Pursuit to pass the time. Walter said the worst part of the ordeal was not knowing how long it would last.

Walter felt fortunate that they were able to make it home as soon as they did knowing that many others remained stranded for much longer. They passed a long line of southbound cars that were unable to get past the jackknifed trucks.

A planned one-hour drive home from her parents’ house turned into a 16-hour nightmare for Susan Phelan when she got stuck in the northbound lanes of I-95 and did not move for roughly 10 hours.

After a frigid night without sleep, food or water, she pulled into the driveway at her Alexandria, Virginia, home just before noon Tuesday.

“Mom was right: Always pack a Snickers bar,” said Phelan, a former federal communications officer. “At some point in the gridlock, I was going to have to start knocking on windows asking for water. At that point, everybody was helping everybody. If you needed something, it was not a problem.”

In Prince William County, emergency crews responded Tuesday to 10 calls from motorists, including complaints about hypothermia and diabetics concerned about a prolonged lack of food, said Matt Smolsky, assistant fire chief. None of the calls were life-threatening, but four patients were transported.

Crews used the express lanes that separate the northbound and southbound lanes to reach patients, he said.

Also stranded was NBC News correspondent Josh Lederman, who spoke on NBC’s “Today” show on Tuesday via video feed from his car. He said he had been stuck about 30 miles (48 kilometers) south of Washington since 8 p.m. Monday.

There were no signs of any emergency vehicles, said Lederman, a former White House reporter for The Associated Press.

“You really start to think if there was a medical emergency, someone that was out of gas and out of heat — you know it’s 26 degrees, and there’s no way that anybody can get to you in this situation.”

Maserati will field a Formula E team in 2023

Maserati will field a Formula E team in 2023