NASHVILLE, Tenn. — We’ve been looking forward to driving the 2022 Ford Maverick for a long time now. Back when the compact pickup truck was first revealed, we at Autoblog stated how we each thought we’d configure ours, were we to buy one. I thought I’d pick a base hybrid, and add the Ford Co-Pilot360 driver assistance package (and a console safe). This was before I’d had the chance to even see the truck in person, let alone drive it. Still, my preferred configuration came out to a mercifully low $22,895. Now that I did finally get to see the Maverick in person and spend a good number of miles on- and off-road in multiple versions, I was eager to find out if my initial thoughts would hold true.

We’ve seen plenty of photos of the Maverick, and have even spotted prototypes testing around the Metro Detroit area, but it wasn’t until we stood next to one that we really realized how diminutive this truck is. At a height of just 68.7 inches — 4.6 inches lower than the Ranger, and 6.9 inches shy of the F-150, we could see right over the roof. It is, after all, built on Ford’s C2 modular platform shared with the Escape and Bronco Sport. But for such a little pickup, it’s got a big personality.

The Maverick’s standard powertrain is a hybrid system, with a 2.5-liter engine and electric motor making a total of 191 horsepower 155 pound-feet of torque. The hybrid is only available with front-wheel drive, but it’s the efficiency darling with a targeted fuel economy rating of 40 miles per gallon city and 33 mpg highway. The hybrid is rated for a 1,500-pound payload and 2,000 pounds of towing. 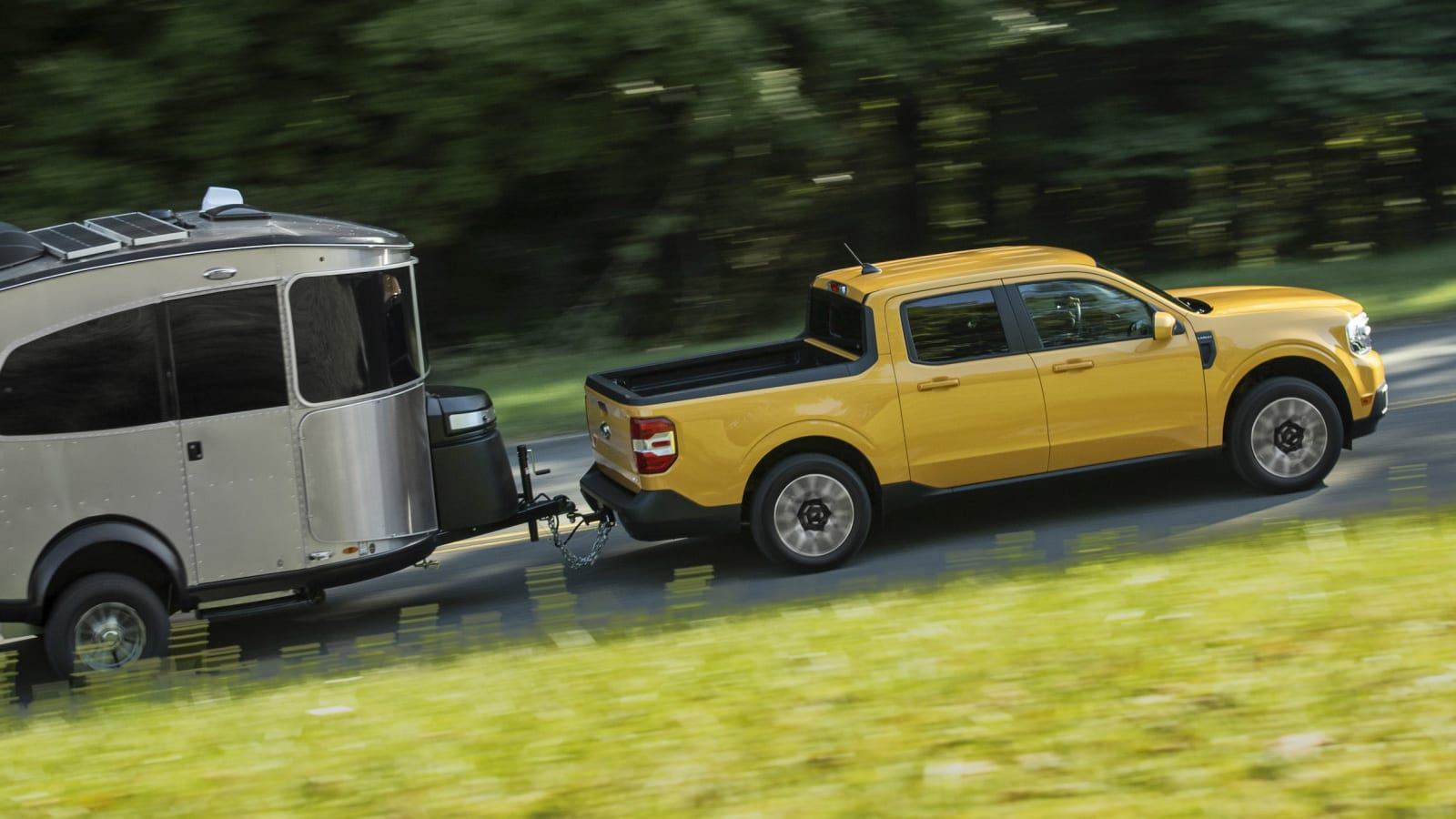 Stepping up into the 2.0-liter EcoBoost engine earns you a total of 250 horsepower and 277 pound-feet of torque. It shares the hybrid’s 1,500-pound payload, but can tow up to 4,000 pounds with the available tow package ($745). It does away with a continuously variable transmission in favor of an eight-speed automatic. Choosing the EcoBoost also means you can opt for all-wheel drive, which also swaps the independent torsion beam rear suspension for a multi-link setup.

Regardless of the powertrain, the Maverick can be had in one of three trim levels: XL, XLT and Lariat. The base XL trim starts at $21,490 (including $1,495 in destination fees) for the hybrid. The EcoBoost adds $1,085 across trim levels, while all-wheel drive adds an additional $3,305. Finally, for those who want to venture further off the beaten path, the all-wheel-drive Maverick XLT and Lariat trims offer the FX4 package ($800) with all-terrain tires, a specially tuned suspension, extra underbody protection, Mud/Rut and Sand drive modes, as well as hill descent control. A fully loaded Lariat with EcoBoost, all-wheel drive, FX4 package, 4K tow package, Ford Co-Pilot360 and the Lariat Luxury package rings in at $35,715. 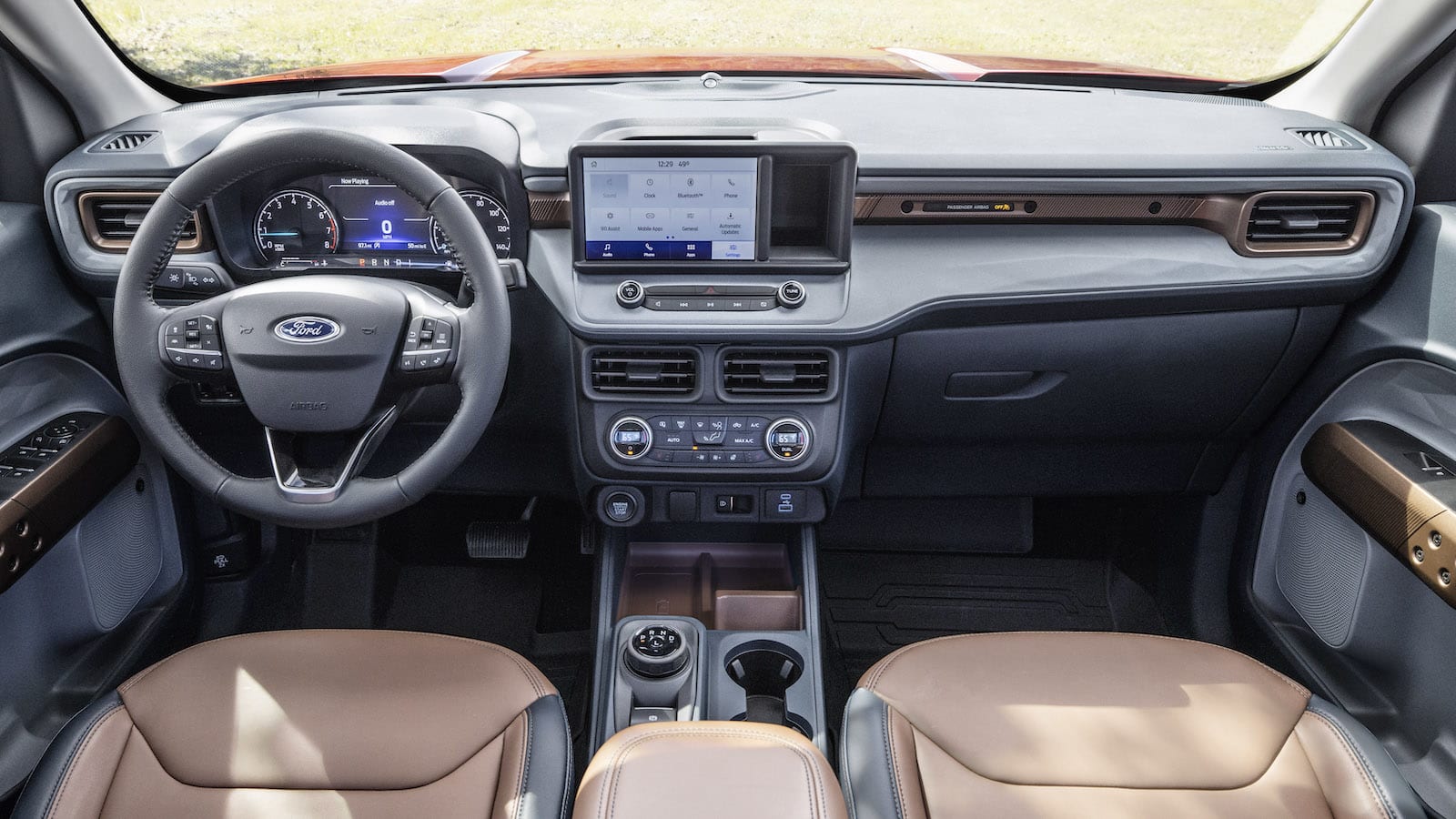 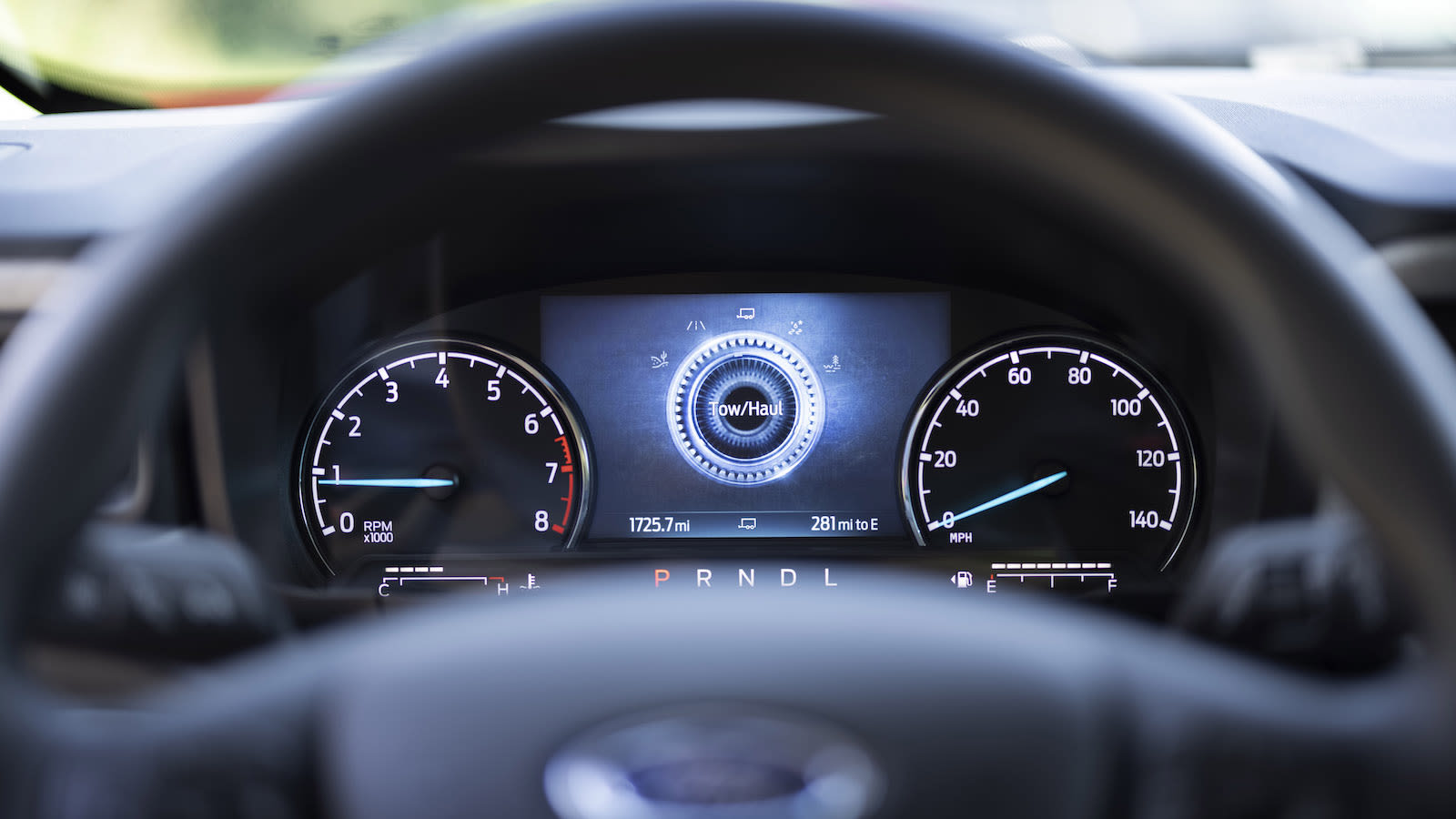 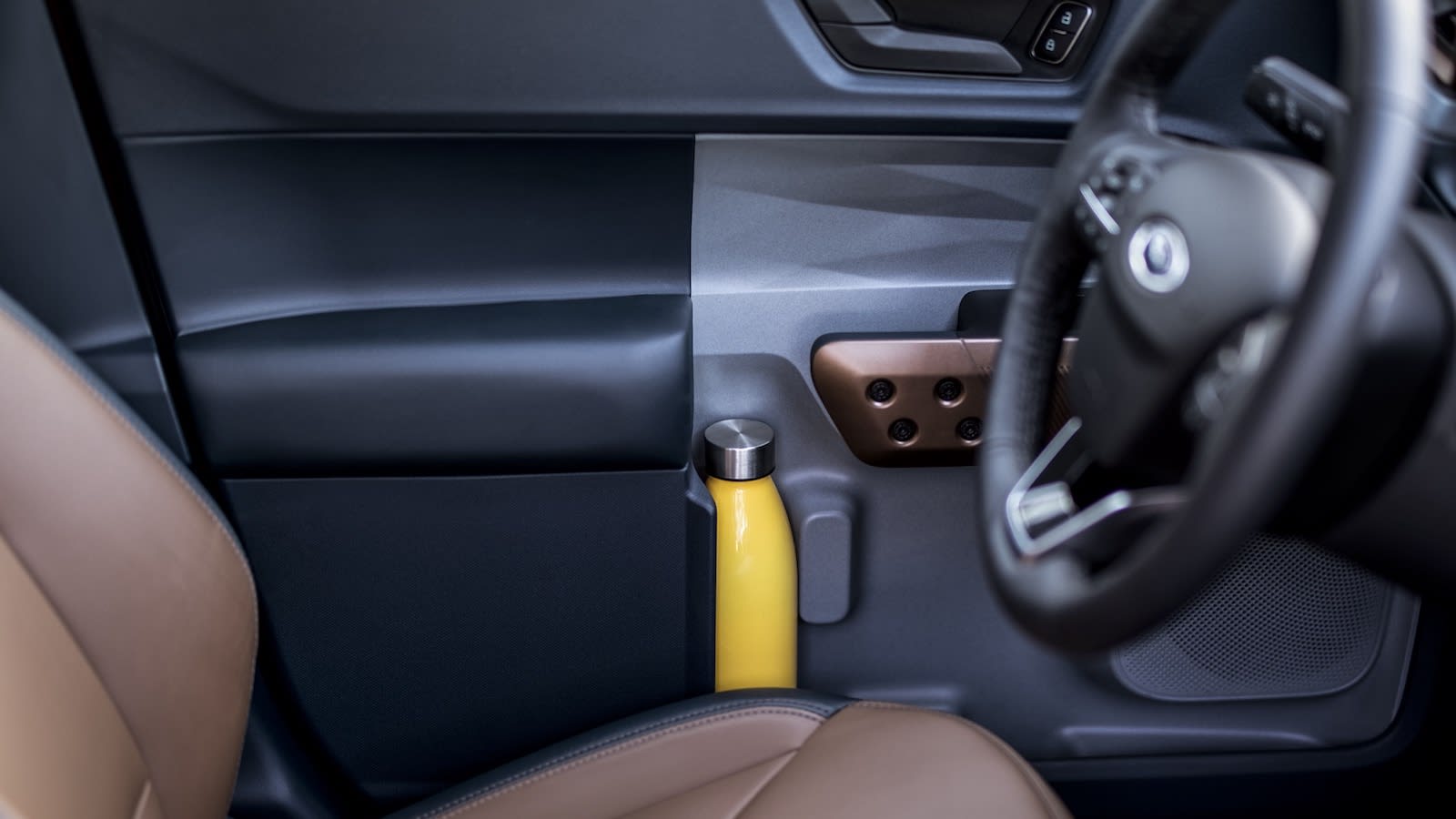 The interior of the Maverick is an interesting place. Cost-saving measures dictate the inclusion of a lot of hard plastics, but we see and feel interesting shapes and textures. The plastic across the top of the dash has a grain reminiscent of canvas. We see interesting colors from the inclusion of ground carbon fiber byproduct in other hard plastics. The door panels are molded to provide storage for a multitude of water bottles of various shapes and sizes (and I’m thrilled to report that a 32-ounce Nalgene fits snugly in the rear door). The door armrest is cut out, leaving a cantilevered grab point complete with exposed fasteners for a rugged, utilitarian look. There are storage cubbies below the center stack, next to the standard 8-inch touchscreen and on top of the dash behind the screen. The rear is home to more hidden storage in the cavernous bins beneath the second-row bench.

The Maverick’s humble bed is a mere 4.5 feet, but it’s clever as hell and packed full of utility. It’s still big enough to fit a pallet of mulch, with a standard 1,500-pound payload. There are slots where one can fit pieces of lumber to use as dividers. The multi-position tailgate can tether to separate pins to hold it in a middle position, leaving the top of the tailgate level with the wheel arches and allowing it to carry 4×8 sheets of plywood in a flat, level position. Up to 10 bed tie-downs and a cargo management system allow you to secure your load. A pair of tailgate tie-downs double as bottle openers. There are two pre-wired 12-volt outlets for wiring in your own accessories, and an available 120-volt outlet allows you to plug in tools or appliances. Cubbies in the side of the bed allow for further storage, and a false floor in those cubbies can be removed to accommodate something like a two-liter bottle. So, yeah, it’s not the biggest bed around, but it’s one of the smartest. 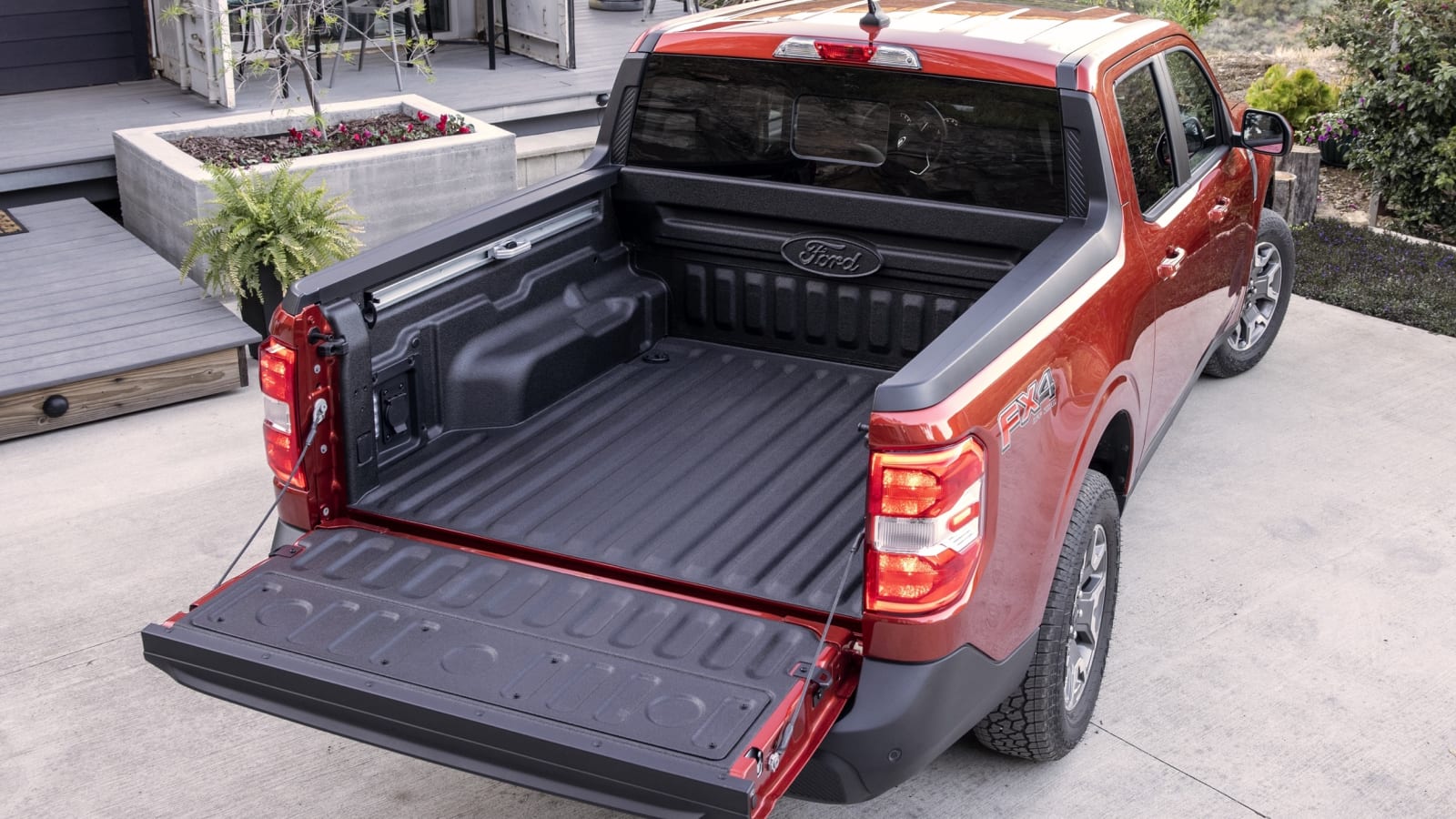 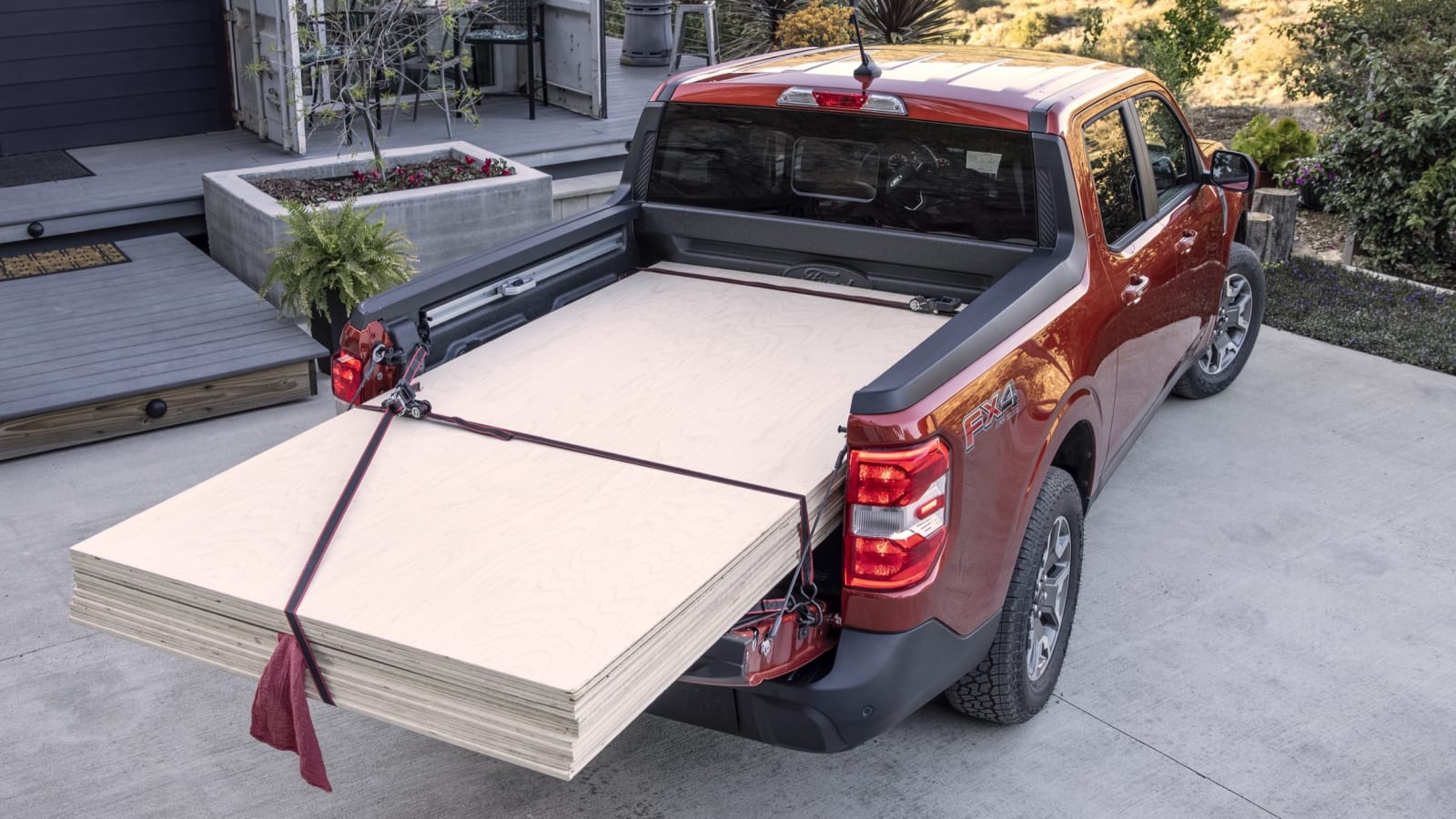 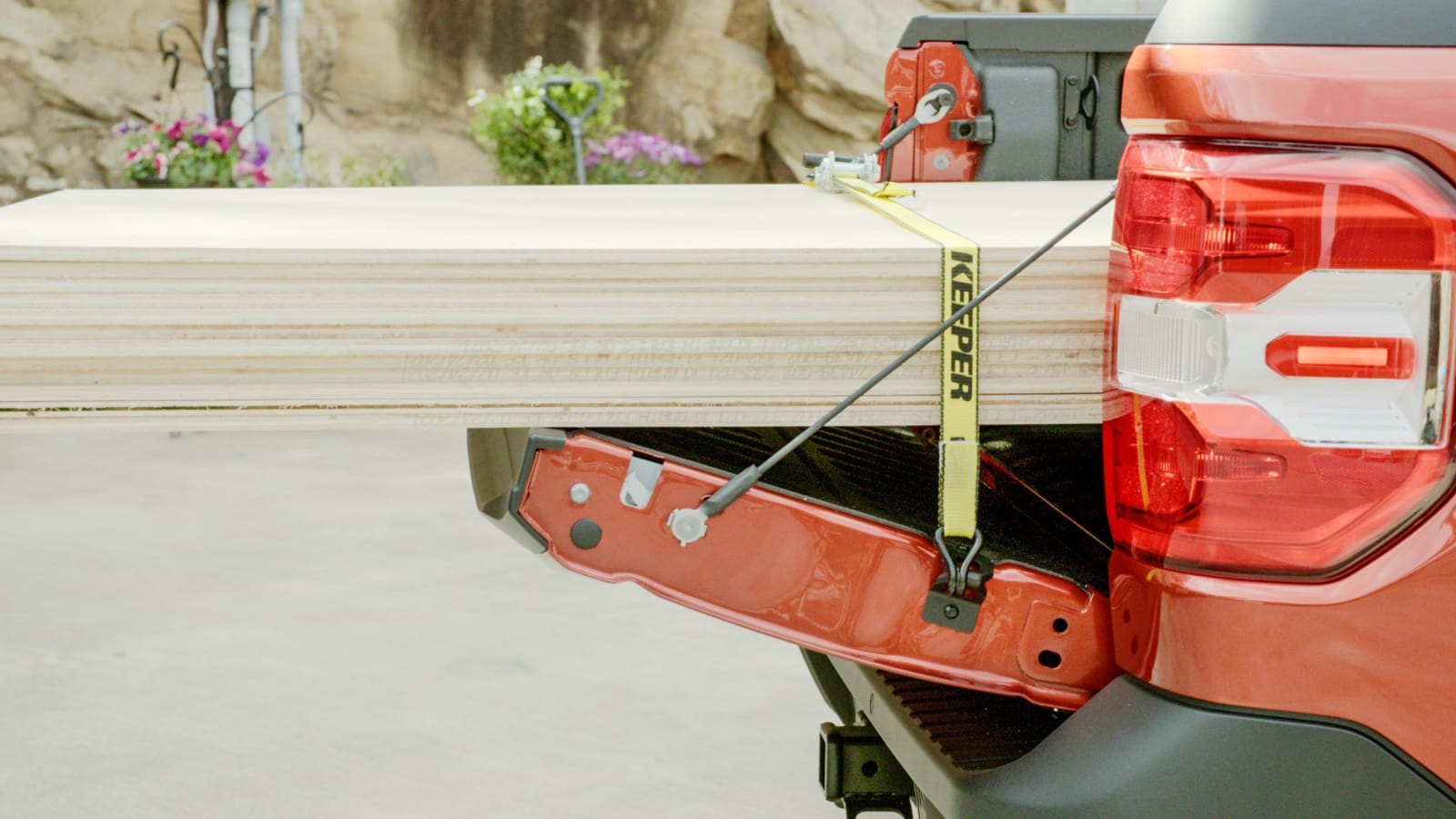 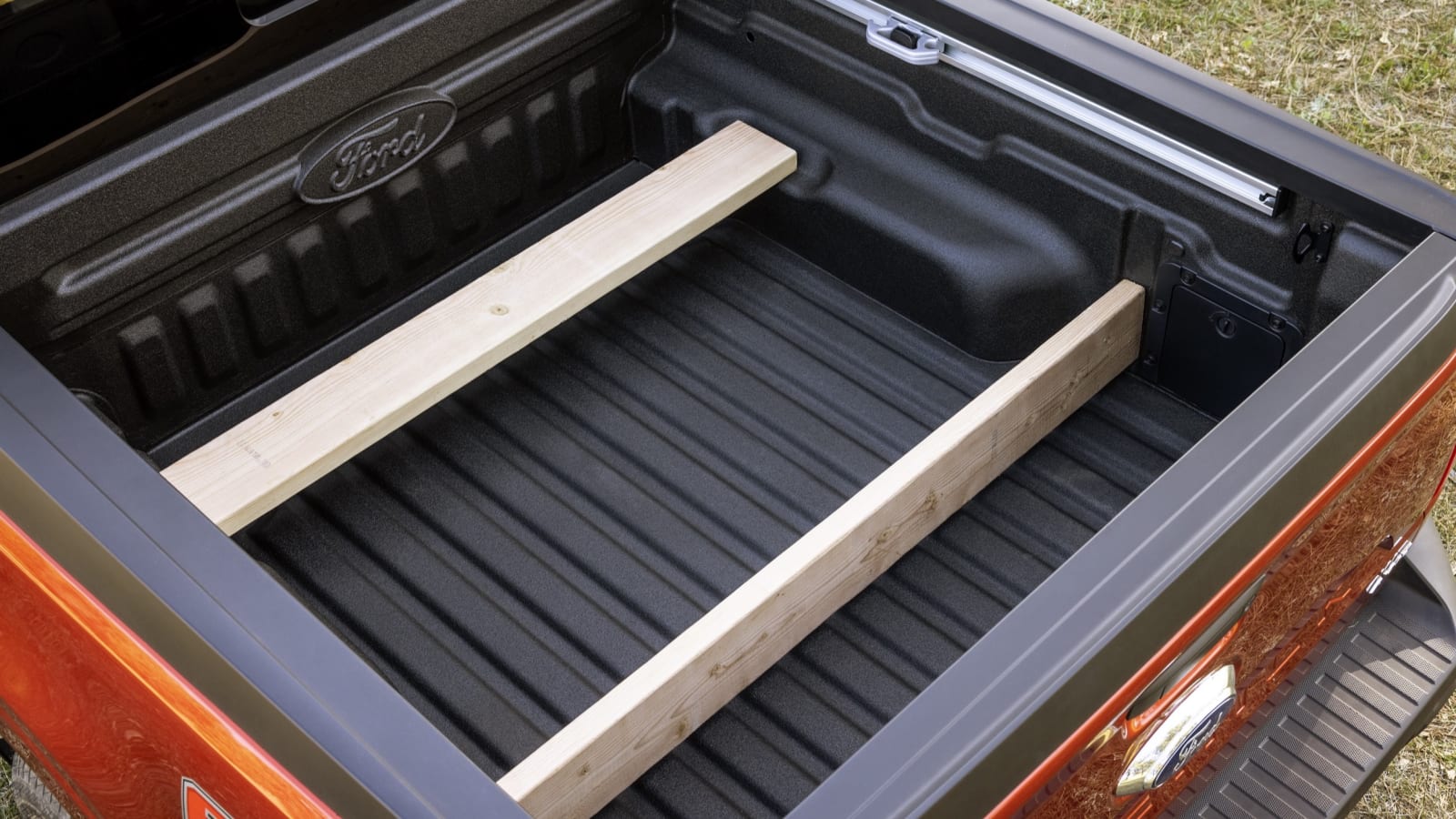 Ford has left a lot of leeway for owners to come up with their own do-it-yourself solutions, whether that’s building a false floor or bike rack in the bed, wiring in lights or other electronics, or even 3D printing holders or dividers to fit in the Ford Integrated Tether System (FITS) dovetail slots behind the center console or in the under-seat storage area. You’ll notice QR codes printed on certain cubbies in the car and the bed. Scanning those will take you to ideas, parts lists and instructions for some of these DIY projects. Of course, Ford is happy to sell you a bike rack or $50 worth of accessories for those FITS slots, but acknowledges that its truck customers historically take these sort of projects into their own hands. Forum dwellers, you know what to do.

As the Maverick’s size would suggest, it’s an easy vehicle to drive, whether navigating the traffic and parking lots of downtown, cruising scenic highways or rural gravel roads. I drove the hybrid first and headed out of town and up the Natchez Trace Parkway. The hybrid’s instantaneous torque make it eager to get underway, and its 191 horsepower is ample to help it carry speed uphill. After about an hour of driving, from the city to the hills outside Nashville, it effortlessly returned about 39 miles per gallon, mostly in the truck’s Normal driving mode. Later, with a half-ton of mulch in the bed and using the Tow/Haul mode, the hybrid-powered Maverick still drove just as easily, though not as efficiently. The one quibble to find with the hybrid was the brake feel — slightly touchy at first, but a little gummy as you dig deeper into the pedal. It was easy to get used to and forget about, though.

Driving the EcoBoost with all-wheel drive provided what most drivers will find to be a more familiar, if slightly noisier, drive experience. It’s definitely quicker to make passing maneuvers and a bit more surefooted in corners and on loose surfaces. Plus, it can be equipped to tow that maximum 4,000 pounds if need be. Its eight-speed automatic transmission will be more palatable to certain buyers, though the hybrid’s CVT behaved admirably. Either way, there’s no option to shift on your own. 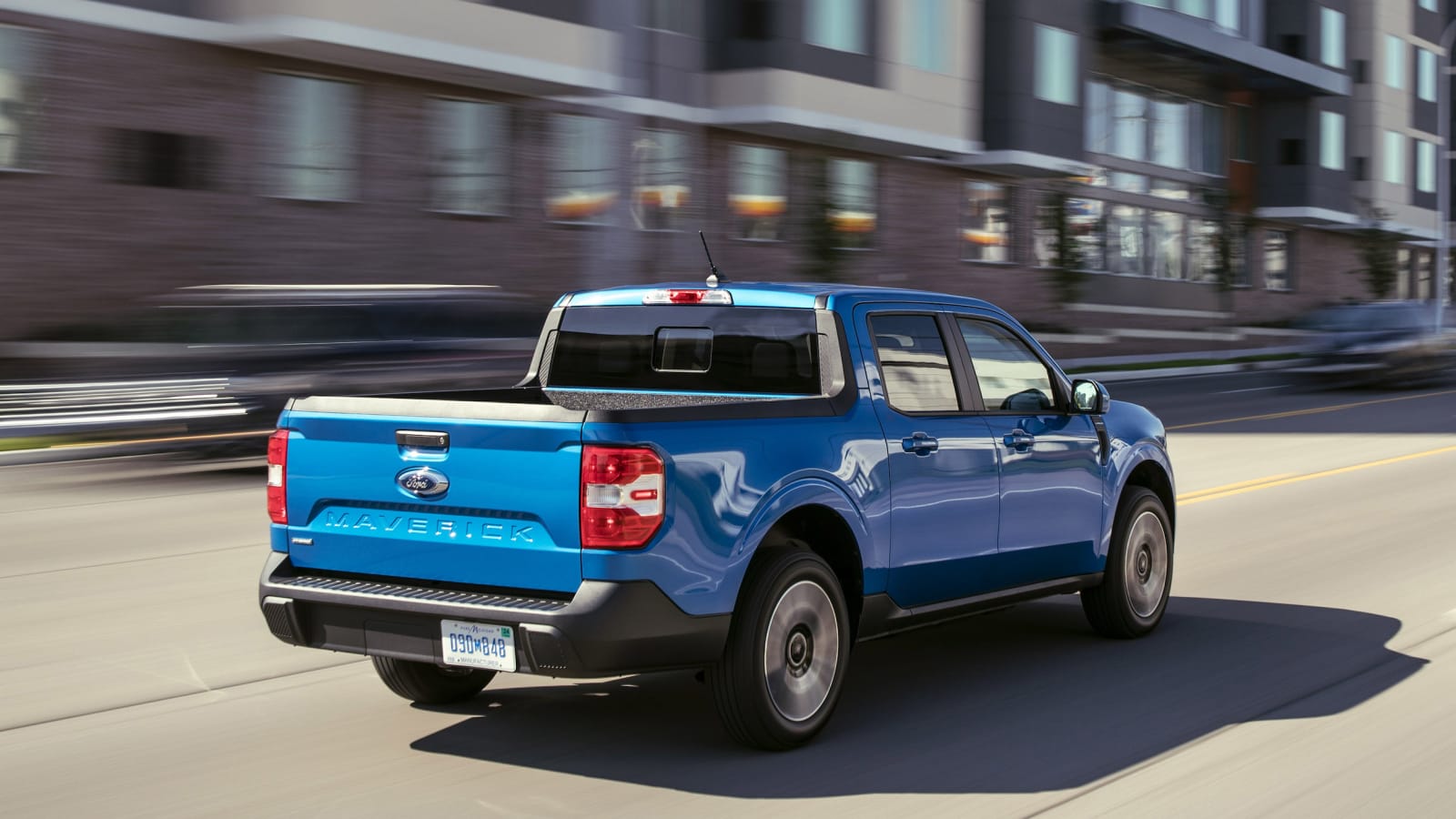 We got to spend a little time in the FX4 package on some muddy, rocky farm trails. The FX4’s monotube suspension, we’re told, better dissipates the heat for a more consistent viscosity and a ride that holds up under more activity. The underbody protection did its job, deflecting some of those bigger rocks from the mechanicals underneath the vehicle. The FX4’s Mud/Rut and Sand modes help provide confidence, while hill descent control makes descending those steep grades a lot less fraught. It seemed fine for most of the types of driving one might need to get to a campsite, across a farm or to a hunting blind. We suspect even the base, front-wheel-drive Maverick could do a lot if equipped with the right tires. And at that price, it could possibly make a decent alternative to a side-by-side for those sorts of work duties.

So, after experiencing the Maverick first-hand, it holds up to and even exceeds my expectations. Would I still pick a relatively stripped down hybrid? Probably. But when a fully loaded Mav still rings in well below $40,000, it’s hard to think that any configuration wouldn’t be a sweet buy. I’m willing to wager the car-buying public will agree. The big question now is, can Ford build these things fast enough?