ANN ARBOR, Mich. — So-called “crossover coupes” are still a thing, and they don’t seem to be falling out of favor. People seem to like their SUVs to have a rounded-off tail, and Audi has taken notice, introducing the “Sportback” versions of its Q5. The 2021 Audi Q5 and SQ5 Sportback offer a sportier roofline at the expense of some utility.

You’re not giving up as much as you’d think, though. The standard Q5 has one of the smallest cargo areas in the compact luxury SUV segment, ranging from 25.9 to 54 cubic feet depending on whether or not you fold the rear seats. The Sportback isn’t much different, ranging from 24.7 to 51.9 cubic feet, which represents a smaller sacrifice to style than the other crossover coupes make. Thankfully, the Sportbacks also don’t sacrifice safety, with both body styles earning an IIHS Top Safety Pick+ rating.

While the front halves of the vehicles are pretty much identical, the Sportback does a wee bit more to distinguish it further from the full-bodied SUV from which it is derived. It gets the S Line exterior as standard, and forgoes roof rails for a more slippery-looking profile. Nineteen-inch five-double-arm wheels are the standard shoes. Inside is a standard panoramic sunroof and sport seats. Other than that, the experience is roughly the same as what you’re used to from the Q5

First up in our driveway was the Q5 Sportback 45 TFSI Quattro. Shared with the standard-body Q5, its turbocharged 2.0-liter inline-four was upgraded for 2021 with a mild-hybrid system that improves efficiency but provides no motive force. Its 13 extra horses instead come by way of mechanical changes to the engine, bringing output up to a competitive, if far-from-class-leading 261 horsepower and 273 pound-feet of torque. It puts that power to all four wheels via a seven-speed automatic transmission.

Our only complaint here is the hesitation with which this little turbo mill responds to your right foot. Audi claims a 0-60 time of 5.7 seconds, but the beat of waiting you must endure after planting your foot seems like an eternity as the nose of a pickup grows in your window. At least it sounds good when it finally responds, particularly in the middle few seconds. Occupants are even treated to a little turbocharger hiss-whistling from under the hood. 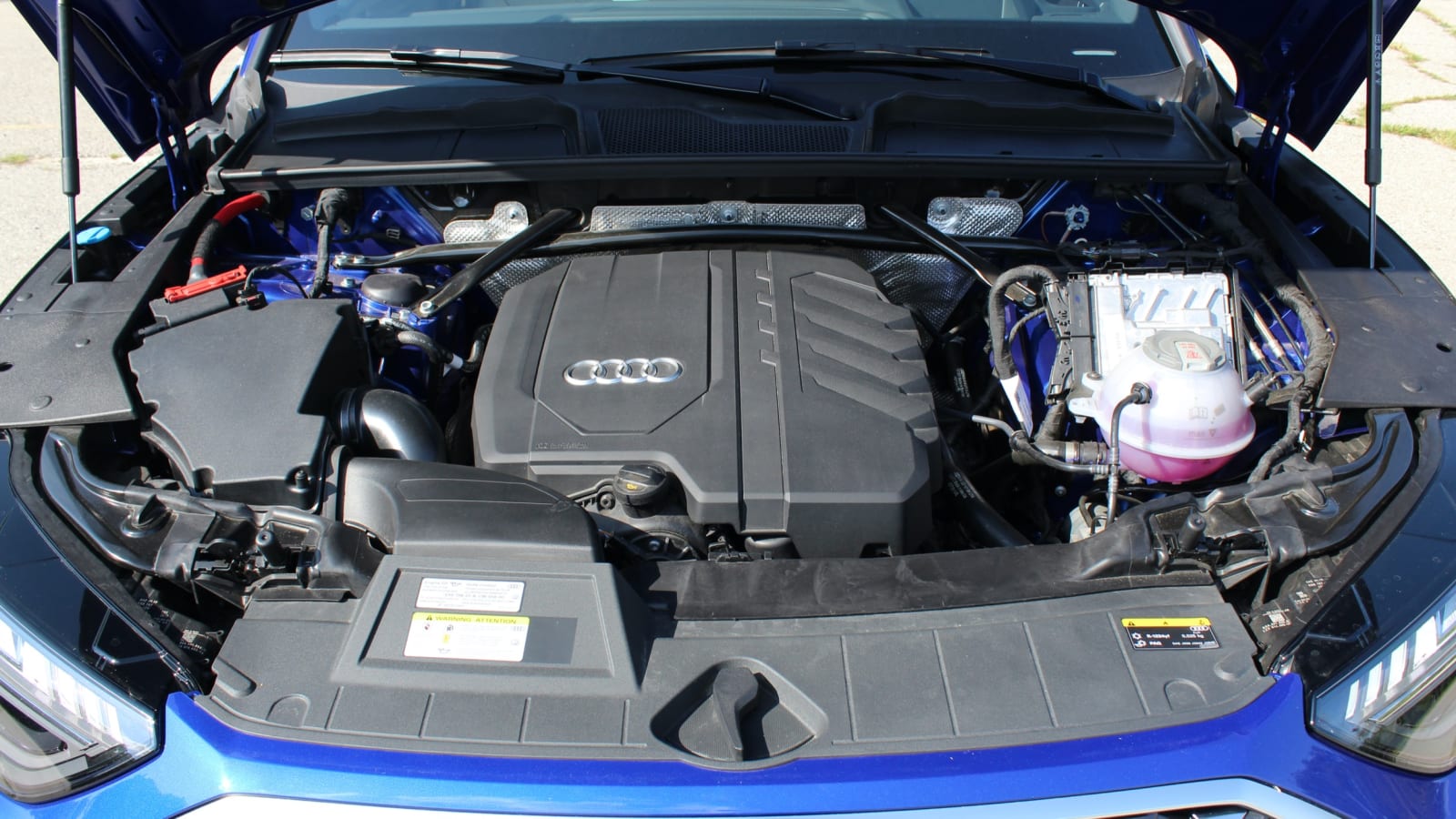 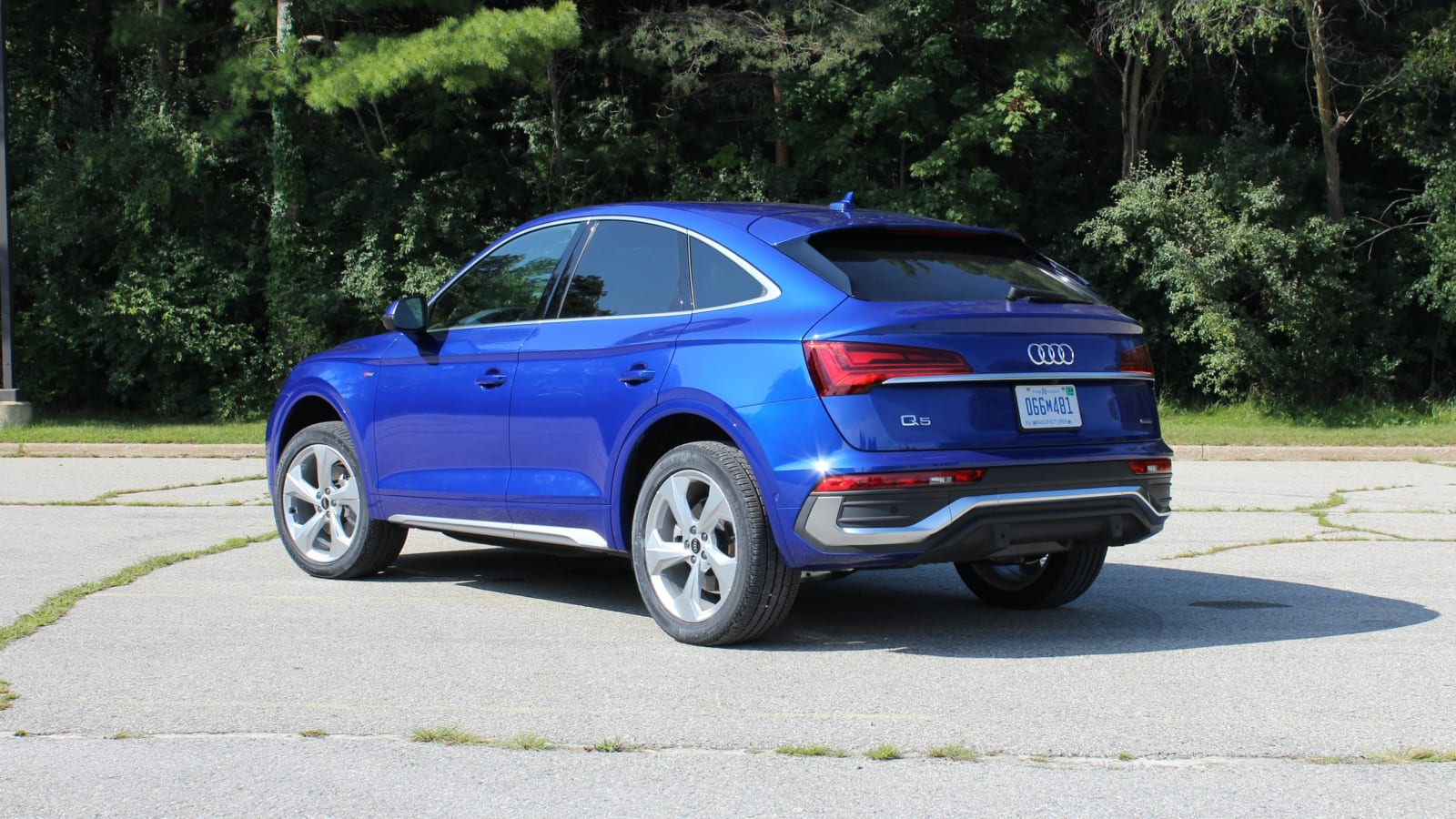 The five-link front and rear suspension is a solid fit for this Q, giving it a smooth and stable ride, providing comfort and confidence on various surfaces, from newly repaved highway to cratered soon-to-be construction zone and the sometimes waterlogged gravel hills that pass between fields of corn and soy. The suspension setup in the Sportback is sportier than the standard Q5 suspension, but the extra firmness didn’t cause us any problems. We appreciate that the Sportback includes this by default, as it helps back up the vehicle’s more aggressive looks with tangible, if subtly so, on-road dynamic improvement. We found the regular Q5 to be one of the most agile compact luxury SUVs and the Sportback rightfully goes above and beyond that.

The Q5 Sportback also comes standard with 19-inch wheels — an inch larger than the standard Q5 rims. Our tester came equipped with optional 20-inch wheels, still bearing all-season rubber. Again, the ride stands up even with these larger wheels.

The interior is tastefully opulent, with design that doesn’t distract or repel. The leather sport seats are firm but comfortable, providing good support underneath your legs. Both our test cars had a cooled/heated cupholder, and we appreciated being able to quench our thirst with a cold gulp of water over longer drives.

Materials appear high quality, but many of the plastics lower down in the cabin are disappointingly cheap under closer inspection. This is consistent with the regular-body Q5. We also, once again, have mixed feelings about the 2021 Q5’s updated MMI tech interface. While we like the functionality of the touchscreen, we miss having redundant infotainment controls on the center console. On the other hand, we always welcome the inclusion of physical controls for climate settings, something pricier Audis have gone away from in favor of touchscreen controls that don’t do the job as well.

Our next drive was the 2021 Audi SQ5 Sportback. This one is powered by turbocharged 3.0-liter V6 making 349 horsepower and 369 pound-feet of torque. Audi quotes its 0-60 time at 4.7 seconds — a full second quicker than the non-S version. This Sportback gets an extra gear, with its eight-speed automatic directing the power to all four wheels.

Our tester had 21-inch wheels — an inch up from the standard equipment — with summer tires. It was also equipped with the S Sport package, which includes a sport adaptive air suspension, sport rear differential and red brake calipers. It also had the optional “dynamic steering,” which offers an adaptive steering ratio based on drive mode and vehicle speed.

In addition to the five drive modes shared with the Q5 — Comfort, Dynamic, Offroad, Auto and Individual — the SQ5 gains an “Allroad” mode, which leaves stability control on and raises the height of the vehicle (thanks to the adaptive air suspension). These drive modes also govern engine/transmission behavior, steering feel and, in the case of Offroad, stability control. Comfort mode is just about right for most situations, but the Dynamic mode is a must if you really want to hurry away from stoplights.

The performance and dynamic upgrades over the Q5 Sportback result in effortless speed, and a completely different sonic experience. While the Q5’s soundtrack can mostly be heard up front, the SQ5 projects its voice rearward, adding cracks and burbles that help raise one’s pulse and encourage you to play around with the rightmost pedal. 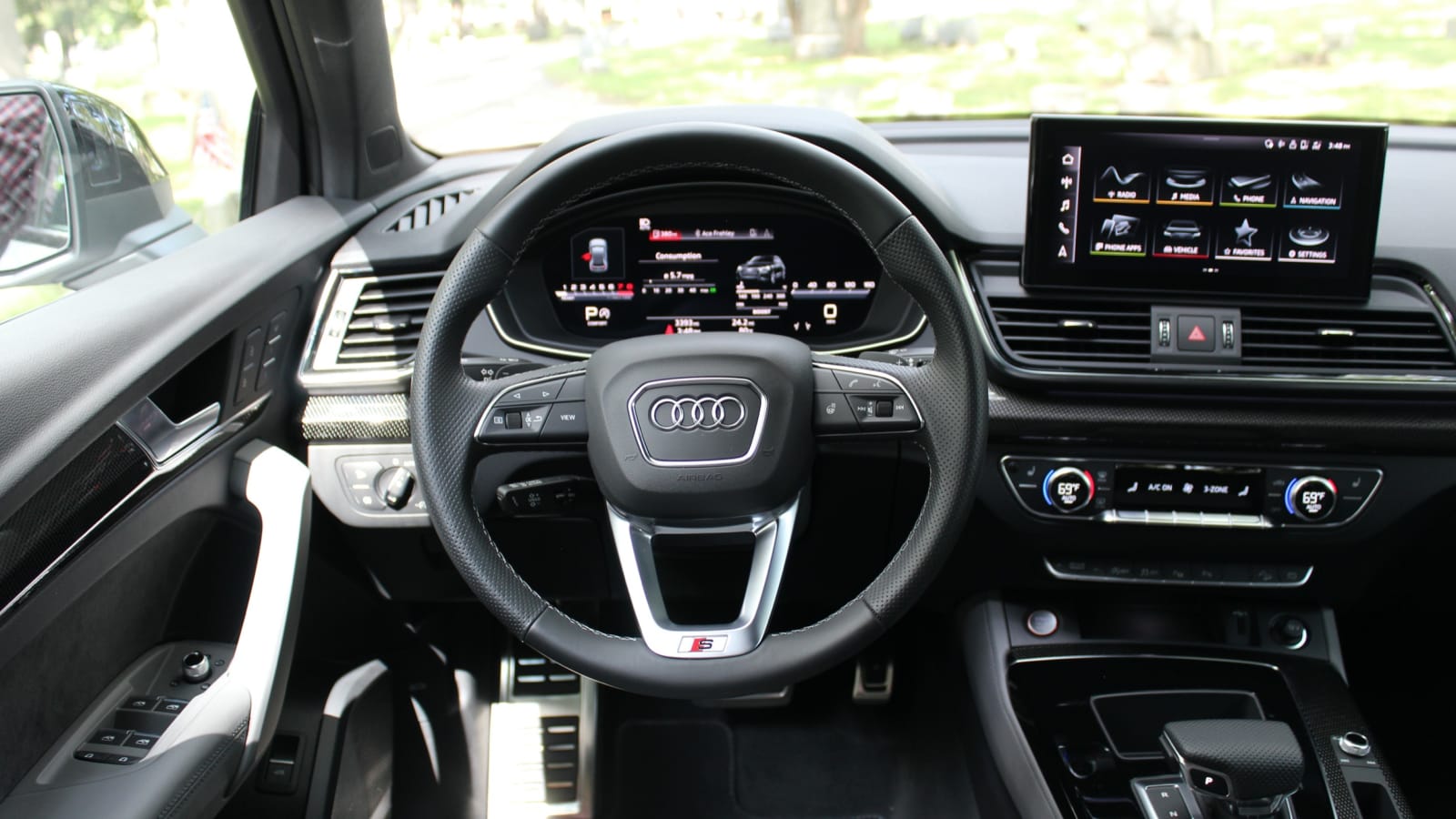 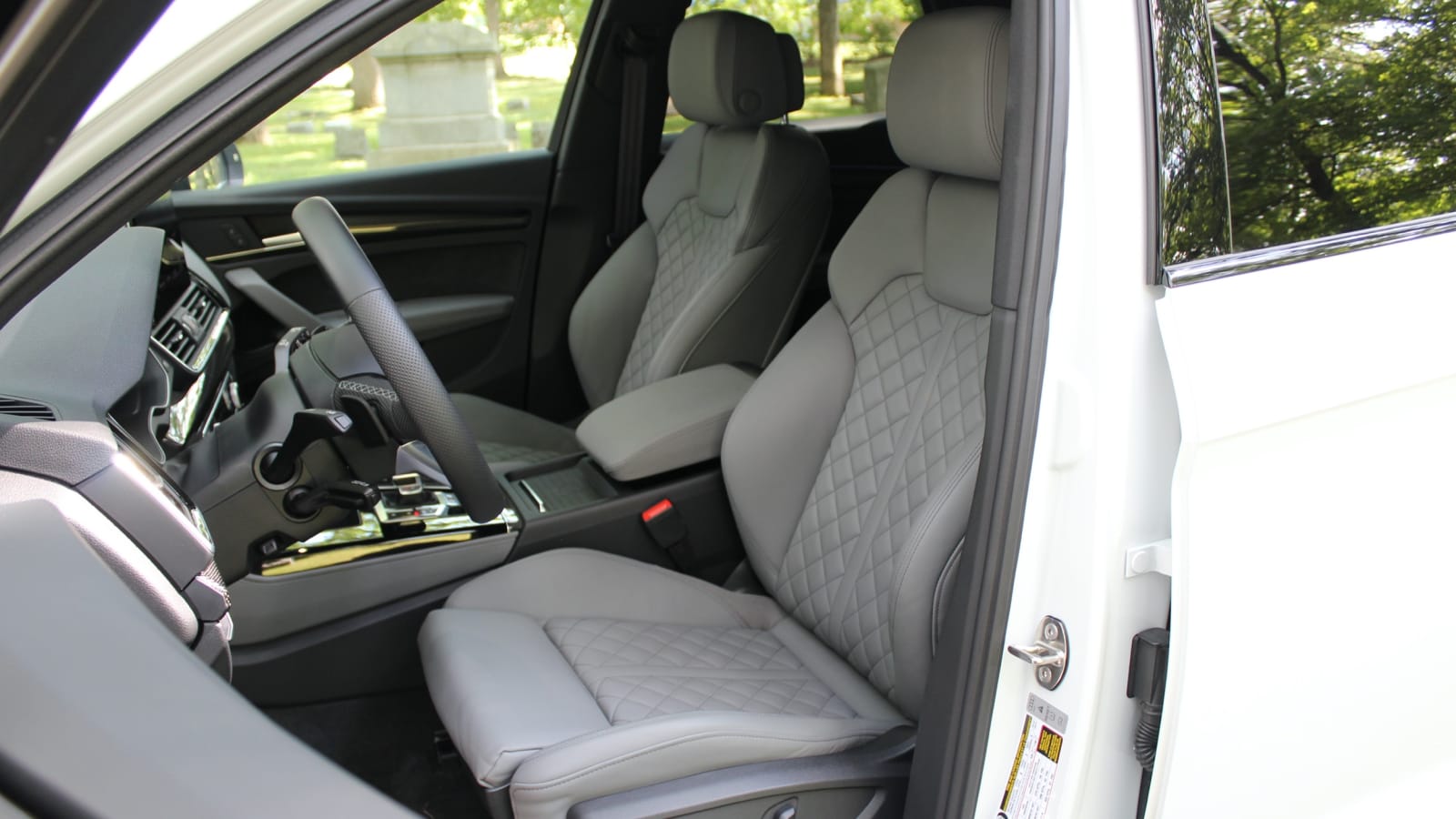 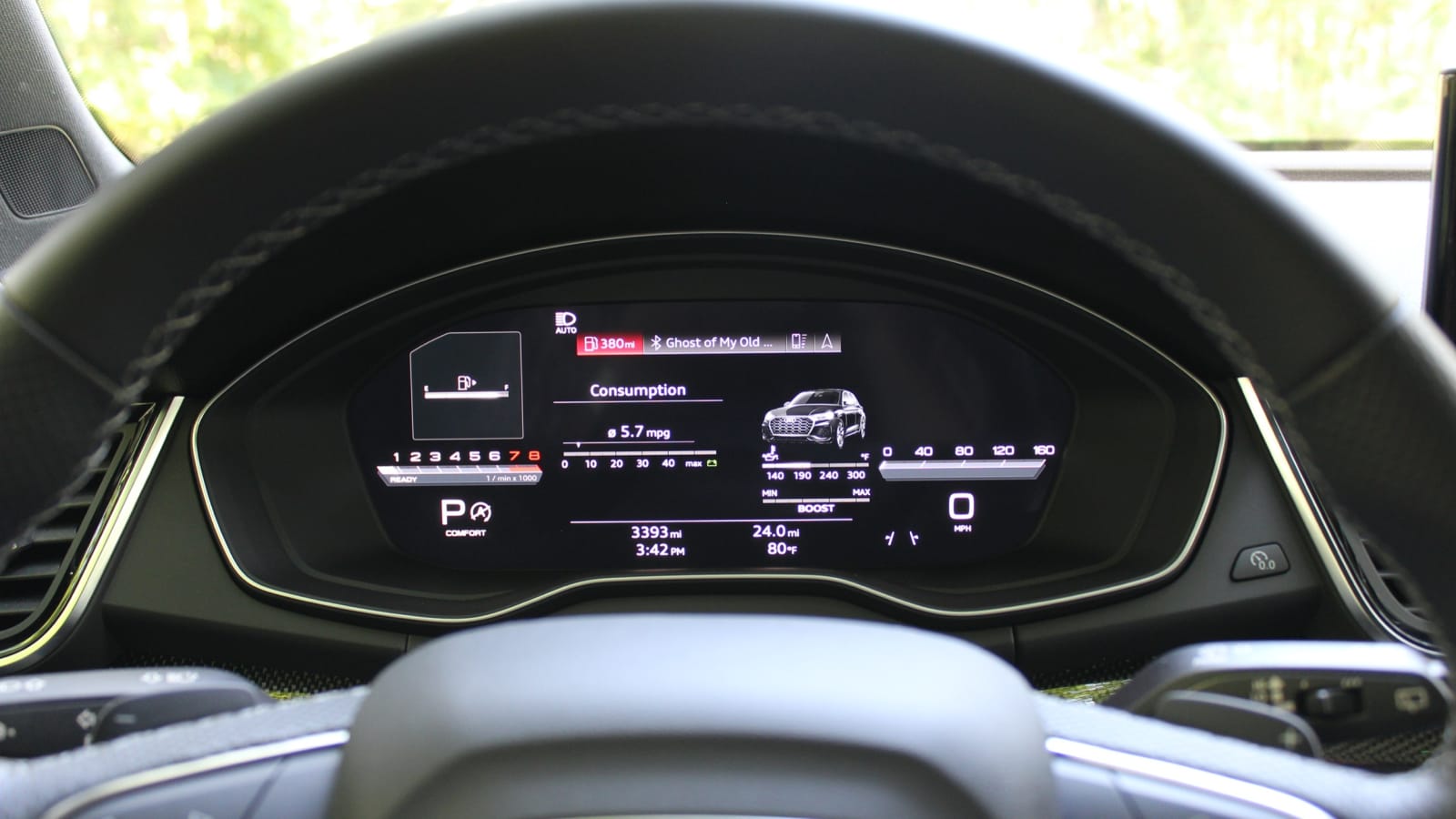 But besides the louder voice and quicker pace, the SQ5 is still relatively mild-mannered. Like the other Sportback we tested, its ride-handling balance is still tilted in the direction of comfort. If you’re looking for a vehicle that serves as a direct conduit between your senses and the road beneath you, you’re not going to get that here. There’s still a fair amount of isolation, and a steering feel that’s light and filtered (especially when in any setting other than Dynamic). Like the Q5, the SQ5 shows plenty of poise when flinging it around curvy, rural roads, but the telepathic connection between human, machine and the earth below isn’t there; it’s translated through a lot of engineering meant to cushion you from the harshness of the highway. That’s great for commuting on crumbling infrastructure, but perhaps not as exciting as that feeling you’d get from something like, say, the Porsche Macan. And that’s a distant cousin of this car, so it’s not like the Q5’s MLB platform isn’t capable of greatness.

There are two main pain points that come with the Sportback versions of the Q5, issues we deem more important than the small amount of cargo space these vehicles lose. The first is price. You pay more for the sportier body shape. The price premium ranges from $2,500 to $4,500 in the Q5, depending on the trim — the price delta narrows as you move upscale. The SQ5 Sportback demands an upcharge varying from $2,400 to $3,400.

The second problem is that the best version of the Q5 isn’t available with the Sportback treatment. If you want the plug-in hybrid, you’ll have to stick with the standard crossover body style, along with its lower price tag and extra bit of cargo room. Boo hoo.

If you’re choosing the Sportback, though, form is probably higher on your list relative to function. As such, the Audi Q5 and SQ5 Sportbacks could be a good fit for you. Their athletic design might be what draws you in. Their comfortable interior and well-mannered ride, then, are a bonus.