You may not know the name, but you almost certainly have seen some of his work. Chris Corbould has been the special effects supervisor for every James Bond film since 1995’s “GoldenEye,” and has worked in some way on every one since 1977’s “The Spy Who Loved Me.” In between Bond movies, he’s been the special effects supervisor on such low-budget indie flicks as the three Dark Knight Batman films and Star Wars episodes VII and VIII. Oh, and he won an Oscar for his work on “Inception.”

I was lucky enough to virtually sit down with Mr. Corbould ahead of the long-awaited release of “No Time to Die“, which my colleague Zac Palmer has seen and reported back about all the cars featured in the 25th Bond movie. Mr. Corbould shared some of his experiences creating some of the most iconic stunt sequences in the series’ history, including how things have changed over the years, how Bond movies are different and what it’s like to not only engineer the stunts, but some of the cars featured in them.

Autoblog: What’s the biggest difference between working on a Bond film versus other franchise films?

Chris Corbould: I think one of the big things is the history behind it. This is the 25th Bond film now and [although] we have to keep changing for the times, there’s also a lot of boxes that have to be checked. There are two car chases in this, one with a DB5 in an urban environment and one with a Land Rover Defender in a very very rural environment. [We have to] come up with original ideas for those chases.

But the biggest thing working on a Bond film is they always pride themselves in doing the sequences as much as they can for real.

Autoblog: I actually unearthed an interview with you in 1999 where you said that “The Bond people pride themselves on STILL doing stunts for real” as opposed to CGI. And that was 22 years ago. 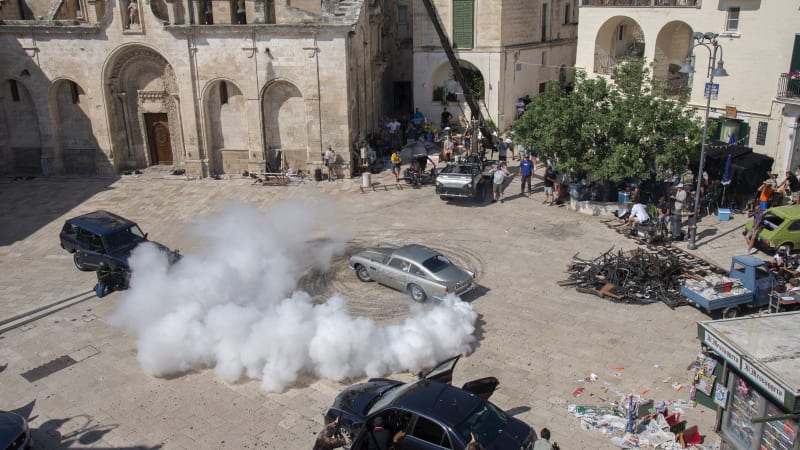 Autoblog: How hard has it been to keep that ideology over the years, with changing technologies and capabilities?

Corbould: It’s not been hard really. The CGI guys have helped us out quite a bit by making our lives easier. They can paint cameras out, they can paint parts of rigs out if need be.

The audience still has this fascination in knowing that something has been done for real as well. A lot of the big effects I’ve done on the James Bond films, there’s as much interest in the behind the scenes of how we did the Tube train coming through the ceiling in “Skyfall“, how we did the sinking house in “Casino Royale“. You know, I spend hours and hours and hours doing interviews about the intricacies of how we built the tube train, how we got it up to speed, how we built the set … so I think there’s a genuine interest in the audience in knowing that things have been done for real and not done on the computer. 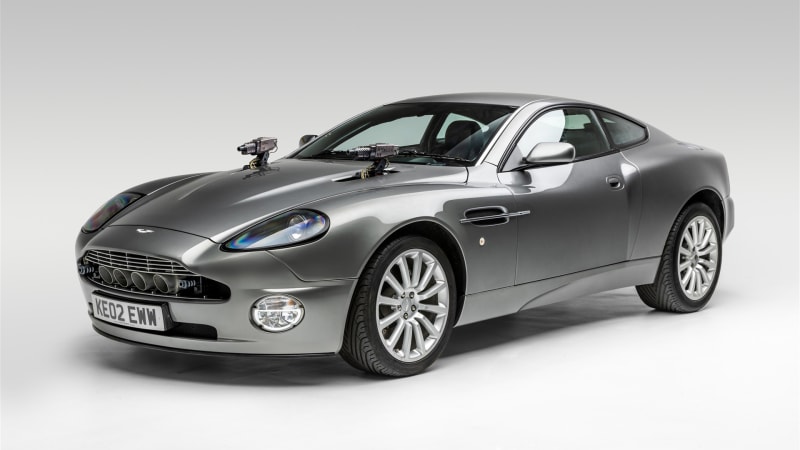 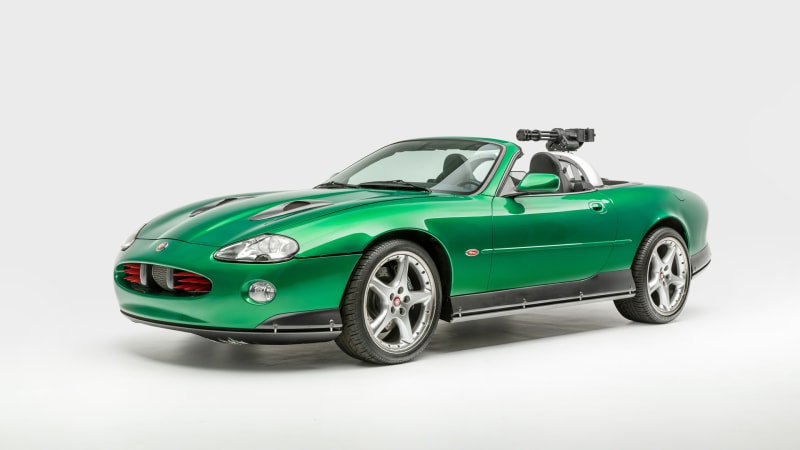 Autoblog: You’ve routinely had to work with pre-production prototype cars and cars your teams have had to build. Even tanks. What have been some of the unique challenges you’ve faced when dealing with prototype and modified cars?

Corbould: I’ll give you a few instances. One, in “Die Another Day“, we had this chase on an ice lake and early on, myself and the second unit director decided it would be a really clever idea to have the all-wheel-drive version of the Aston Martin Vanquish and Jaguar XKR. The only problem with that was there wasn’t such an animal. They didn’t make them. I went down to both factories and they didn’t make them. So my special effects department made four Aston Martins and four Jaguars, totally changed the front ends of each one of those, and made the only four-wheel-drive versions of those cars [ever] to make that sequence on the ice.

The other thing we had to consider was we were on ice and we had to think of the safety of the drivers and what would happen if the ice broke. They were 2 tons each, those cars. So we built into the car automatic inflation bags so that if it did happen to fall into the ice these things would automatically inflate and keep these cars afloat (see video below).

The other instance I would say is when we built the Batmobile (for “Batman Begins“). That was bespoke. There were component parts we bought, but the chassis was all built bespokely, the body work was all bespoke, every single part of that was built. Two different sides of the spectrum there.

Autoblog: What has been the biggest change or most important innovation in doing car stunts during your career?

Corbould: The CGI has helped a lot in removing the need to have unnecessary dangers. So if you’ve got a near miss with a car, sometimes if you want it to be a real near miss, you might put a CG car there to remove that risk to the driver. So I certainly think they’ve helped out a lot to embellish what we do for real.

Corbould: No, I don’t think there is. The DB5 goes back to Goldfinger. It’s nice seeing it in a full battle mode now rather than just a cameo role.

We actually came up with a few ideas that didn’t make it onto the screen that we probably couldn’t have been done 20 years ago. When we were talking about gadgets, we were talking about all sorts of weird things like drones that would appear from behind the rear number plate and were shot into the air, parachutes that came out of the roof when it went off a ravine, but none of them made the cut. They probably would’ve been difficult to do 20 years ago.

Autoblog: That brings up the fact that you do more than make action sequences happen – you have frequently come up with the ideas for them in the first place. “GoldenEye” second unit director Ian Sharp gives you credit for coming up with the idea of the movie’s iconic tank chase (see video above). I also read that the idea for the tube train crash in “Skyfall” was the result of a dream you had. Are those rare instances, and have you ever gotten more than you bargained for when you suggested something?

Corbould: They were the two big things. But also the end sequence in “Skyfall“. I got called into a meeting with [director] Sam Mendes and the producers, and they weren’t happy with the ending, so they asked, ‘Chris, can you get your thinking hat on and come up with something different?’ And that’s where I came up with the idea of the helicopter attacking the house. And I was lucky enough that on that one that Sam loved it and said go away and previs it. So I prevised it, tweaked a few things, he was happy with it and said, now you go shoot it. So he gave me my first role as second unit director shooting that end sequence of “Skyfall“.

The tube train one is an interesting one because I had an interesting call from Sam while I was finishing up “The Dark Knight Rises“. And he said I’ve got this great foot chase through the Underground of London that I need one jaw-dropping moment. So out of that, I go to sleep, the gears are turning in my head, and I came up with the Tube train [crashing through the ceiling], which he loved.

When I got back to England I assembled all my engineers and draftsmen around and said “let’s talk about this.” And one of them said to me, “What planet were you on when you dreamt that sequence up?” I said “What’s the problem? We’ll just buy a bunch of old out-of-service Tube trains.” And one of them said, “Chris, they’re 60 tons each.” “Well, we’ll build our own, then.” And then a guy said, “They’re 60 feet long, Chris.” “Well OK, that’s what it’s going to be.”

Autoblog: What did the solution end up being?

Corbould: That was a really big sequence that stretched from one corner of the 007 stage to the other. It was on an overhead monorail system, so the set had to be all constructed. I spoke with the art department, I said “I don’t want this to just skim across the floor. This thing is supposed to weigh 200 tons, it should churn the floor up.” So the construction guys and the art department built a whole floor about a foot deep with breakaway materials so when the train is plowing into it, it would look like it’s churning all the concrete up. That’s the same with the pillars. Now, we had to get it up to speed, but the bigger problem was stopping it. We had about 10 to 15 tons of weight going at about 30 mph and we had to stop pretty quick. There were then four or five different systems in there that stopped it. One system would kick in, then another, then another.

Autoblog: Thanks so much for giving us your time. I’m a huge James Bond fan, going all the way back to “GoldenEye,” and it’s really special to talk to someone who’s played such an important part in creating the movies.

Corbould: That’s very kind, thank you. There’s a lot of people who go into doing it. I have a 100-plus crew who are all geniuses in their own right, so I take the success on their behalf.